My cat is a zombie…from hell

WARNING: This post contains REALLY GROSS PICTURES of dead rodents. It’s gory and graphic and if you get at all queasy over mice, dead things, headless things, brains, eyeballs, or exposed teeth, please close this page immediately and go do something else that’s pleasant and charming. Also, if you don’t like cats, you should move along.

Have I mentioned our brain-eating zombie cat? Because we have one and I never know whom I’ve told.
His name is Toki and he is sometimes a doctor (he refuses to leave our sides when we’re sick or injured) and usually a lover (he has a very romantic accent when necessary) and is mostly adorable and sweet. Here are too many pictures of him so you can see how precious he is.

From cute baby bat to cone of shame, Toki is always (usually) covered in the hansums.

We got him and his sister (shut UP about that littermate crap already. They came out of the same mom, they’re brother and sister, ok?) in 2008 when they were 8 or 10 weeks old. I don’t remember, exactly, because I’m a crappy mom. Can you imagine if I had human kids? I’d be all, “What? Last week was your birthday? Who the hell ARE you, anyway, and why are you in my kitchen?” It would be disastrous.

Such a drama queen

Originally, we were going to get twin tabbies but they were boring. Instead, Toki chose me so I had to choose him back and Gabe made the unfortunate mistake of going with the prettiest of the litter instead of choosing the one who chose him and we’ve paid for it ever since. She’s a horrible little beast (I love her anyhow). Her name is Evening and she is a diva.

Because of their natures – Evie being all concerned about her stupid fluffy tail and Toki being the prowler and pouncer – we figured our little man would be the first to bag a hunting trophy. We were wrong. Evie brought the first critter – a pregnant mousieshrewvole. She didn’t kill it, though; just stunned it and gave it to us.  Toki was very interested in the whole affair and a week or so later, he brought in a bird. He was quite proud when he presented his catch and we praised him and I secretly vowed to attach more bells to his collar because he did kill his victim.

Several weeks later, I walked out the front door on my way to work and found a decapitated mouse on the doorstep.

Not what I expected to almost step on when I walked out the door.

The following week, there was another, complete with bloody bits of bone parts.

Now it’s getting disturbing. More disturbing, however, is that I take these pictures.

I wondered why there had been deposits sans skulls on our front steps. Was it a very small death threat? Did someone in the house have a crazy stalker who left gruesome presents in the night?

I solved the mystery when I came home one afternoon to find my darling sweetheart angel baby all hunched up on the walkway doing something odd. His back was to me and I thought maybe he was hacking up grass as my dumbass children tend to do. I got out of the car and said soothing things as I walked toward him. He looked over his shoulder with large, psycho-eyes and STARED at me. I began to worry he had rabies or something.

It wasn’t rabies. It was a dead mouse and I had interrupted Toki’s Ancient Egyptian-like method of removing the mouse brain via the eye socket. But he didn’t eat the eye. It was dangling from said socket and there was lavender-gray brain coming out behind it.
If I were a better person, a smarter person, a more sensible person, the type of person my mother probably hoped I’d become rather than the product of her own weird ways, I’d have done pretty much anything other than what I did do. I picked the partially de-brained animal up by its tail – WITHOUT USING FINGER PROTECTION! – and took pictures because that’s the totally sane reaction to finding out your sweet little kitty boy is actually a horrible monster.

Now I live with the knowledge that my cat is a brain-eating zombie and he is going to get to me one day, too 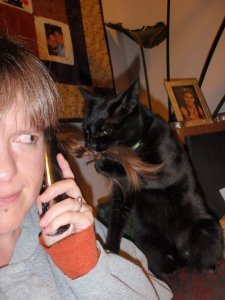 Brains/braids – so similar and in the same area. He’ll figure it out one day and I’ll be in trouble.

Filed under My Dearly Beloveds

15 responses to “My cat is a zombie…from hell”