When I turned 11, my grandparents, ZZ & Poppop, gave me a diary. They thought I’d love it. I thought so, too, because it was pretty and it had a lock and key. Unfortunately, I didn’t quite get the whole concept of recording my thoughts in a book. For instance, I promptly lost the key and couldn’t open it for several weeks. Also, even though I got the diary in September of 1983, I thought I had to wait until the new year started to begin writing. I’ve always been a stickler for the rules, even the imaginary ones. 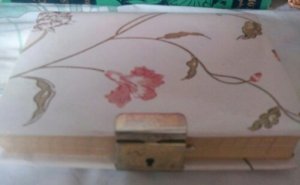 Just look at it! So lovely! It’s not cutesy with little kid graphics. This is obviously made for a woman who has amazing things to write. Secret things. Dangerous things.

January 1, 1984.
Dear Diary,
Today was pretty boring. We came back from spending the night at Dale’s house. Then Dale and her kids came over to see us tonight. Alex tried to drown me. I was taking a bath with her and she sat on my head.
NOTE: Alex (aka Bedot) is my youngest sister and she was 4 at the time. As the oldest, it was my job to bathe her and make sure she didn’t drown in the tub. Ironic.

Then there’s a hand-drawn line under that entry and below that is:
Dear Diary 1985,
Sick.
NOTE: I guess I was ill.
And below that, in round teen-girl cursive, 1990! Yeah buddy!

It would seem I didn’t quite grasp the point of a One Year Diary.

Just for fun, let’s explore a couple of other entries. Of course, as I transpose this, all I hear in my mind is Amy’s diary. I’m leaving the spelling and grammar as is. I’ll even try to format each entry as it appears on the page.

Dear Diary, April 19, 1984
Oscar’s sick! He going to dye! I buried the babies today. I dug up a squirrle. So I cried and cried. I fell terrible.
NOTE: Oscar was a rabbit. The babies were from our female rabbit. She killed them…and was possibly working on Oscar, too. Oh, and also? We buried all dead animals in our yard, even if they weren’t ours. Thus the squirrel.

July 10, 1986
My chicken Peep McNugget layed an egg. Her very 1st.
NOTE: I hatched that chicken myself. She was later viciously murdered by a contraband terrier from hell (NEVER FORGET!) and she died in my arms. I didn’t get that from a song, she really did die in my arms.

’85, September 9
Dear Diary,
My fingernail came off today while I was reading the sword of Shanarra! Oh well!
NOTE: Reading is dangerous?

Happy Birthday Erica! September 23
Dear Diary, I had a great birthday. On Friday we went to ZZ’s and invited Kim over and had a party, then the next night we went to The Mug and had a small party, then today we had a party here & went hiking with Randy & Glenda.
NOTE: That was totally the beginning of my party lifestyle and it’s still about that exciting.

October 31
Dear Diary,
I was a fairy,
Bubba – Pirate
Noelle – Hobo
Bedot – Skeleton
NOTE: Bubba is my brother. His real name is Chris. I’m not sure I’m allowed to mention that, as I didn’t ask permission, but Noelle and Bedot totally said I could use their names, so 2/3 isn’t bad, right?

And we’ll end with this one because it shows I was a stalker at a very young age:

November 1
Mags Furuholmen’s  birthday.
Dear Diary,
ZZ left, I went to the Doctor again. I got a blood test.
**Mags’ birthday definitely takes precedence on this page. I wonder how he’s doing? Last I read, he was quite ill. Happy belated birthday, Mags. I hope you’re doing ok. 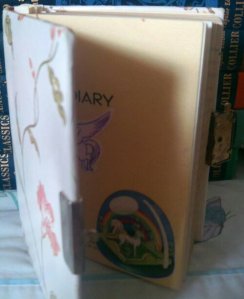 Filed under My Dearly Beloveds, My journey to writerhood, White trash childhood