I am why I can’t have nice things

So you know how when you’re a kid and you find a secret stash of presents and you get all excited? And then you realize there may be more gifts hidden in other places and you start looking and soon you know all the good spots? After that, you start snooping around those areas to see what is lying in wait as each holiday draws near? And you think you’ve found them all and you know what every gift is before you get it only somehow, there is always one you didn’t find and it’s a surprise? Yeah, that never happened to me.
Instead, I was both more direct and much sneakier and, as a result, I managed to ruin Christmas for myself.

This is my favorite ornament and has been since I was little and the dog ate my other two favorite ornaments. I don’t know how long it’s been in my family but my mom was very happy to pass it along to me. She never liked it. Cuz she’s a Scrooge or something.
And I should mention – I don’t have any pictures of childhood Christmases, more’s the pity, so I’m just going to post pictures of the ornaments on my tree. I’ll tell you about the ornaments, too, so it’s sort of like you’re getting a little story inside of a bigger story and the two are not really related. I know, I’m great, no need to thank me. I’m just spreading holiday cheer.

We have a grandmother on the east coast who used to buy us a ridiculous amount of Christmas gifts, wrap them, and mail them to our house. We’re her only grandchildren so she went all out. She’d send boxes full of beautifully wrapped presents and we’d have the BEST TIME EVER just opening the boxes and divvying up the gifts between the four of us, making little piles and counting our treasure. We were like greedy little Scrooge McDucks.
One year, though, when I was probably 12, those shining presents became too much of a temptation. I would stare at them for hours, needing to know what was inside each one. I don’t know why it was so bad that season, but it was and it all came to a head on the day I was left alone in the house with all those pretty bows on those colorful boxes.

I spent the afternoon meticulously unwrapping every single one of my gifts. It was late enough in December that our parents had put out the “From Mom & Dad” gifts and I think ZZ and Poppop (maternal grandparents) had given us our gifts early, as well, because every gift I would receive that Christmas was under the tree. All but the Santa gifts, of course.
I painstakingly peeled the tape back from the seams, carefully unwrapped every present, peered at whatever was inside, then wrapped it all back up. I did a phenomenal job (actually, I think that’s how I learned to wrap gifts, via reverse engineering), leaving no evidence of tampering.
I lorded my knowledge over my siblings for days. “I know what I’m getting. I know what every gift is,” I would tell them and they wouldn’t believe me because it was obvious the gifts hadn’t been touched. I felt amazing, like I had all the power in the world and like I’d gotten away with something monumental.

Those of you who made this same mistake know what’s about to happen. Those of you with kids know what’s about to happen. I did not see it coming, though, and I was blindsided by my own folly.
We liked to all sleep together in one room on Christmas Eve, which was probably a lot easier for my parents, now that I think about it. That year, we were in Noelle’s and Bedot’s room, Chris and I in our sleeping bags on the floor. We’d stayed up late singing Christmas carols and telling stories and doing the things we did during Christmas Eve Night Sibling Sleepovers. Mom & Dad had to keep banging on our door and threatening us to shut up or else Santa wouldn’t come. We must have stayed awake until midnight.

And still, I was ready to get up and go by 4:30 a.m.
I woke my siblings and told them we needed to slip out to see if Santa had come. We were ninjas, slinking like The Grinch out of the bedroom, down the hall, and into the living room. The lights twinkled on the tree, lighting our way, letting us see that Santa had been and gone – our stockings were full and there were four unwrapped gifts lying temptingly around the tree. We checked those out first, softly oohing and ahhing and doing the whispered, “look! look what i got!” Then we snagged our stockings and Grinch-snuck back to the bedroom where we could shut the door and turn on the lights. We emptied our stockings and inspected our loot, comparing with one another. Noelle, Bedot, and I often got different versions of the same thing, like LipSmackers, and Chris usually got something else entirely, like coal. He was a bad kid.

Chris made this ornament in second grade when his class was forced to learn sewing. Turns out, that skill has come in handy for him throughout his life, though not to make more stuffed ornaments. I think he did a pretty good job, actually.

Once it got a little lighter and we felt we would be safe venturing downstairs into our parents’ lair, we stealthily returned our stockings, then ran downstairs whooping and hollering, “SANTA CAME! IT’S CHRISTMASTIME! LET’S OPEN PRESENTS!” I’m sure there was some negotiating – “Go back to bed, it’s not even light” “YES IT IS! I CAN SEE THE SUN!” “No you can’t, it’s 5:45” “IT’S LIGHT! SANTA WAS HERE! GET UP!” “Just give us 15 more minutes” “OKAY!…one…two…three…IT’S BEEN FIFTEEN MINUTES! GET UP!” “You have to get out of our room and go back to bed” “GET UP GET UP GET UP!”, that sort of thing – but they eventually hauled their lazy asses from bed, made some coffee and blearily watched us tear open our treasures.

And that’s when the full magnitude of my greedy little mistake caught up to me and kicked me in the teeth with steel toed elf slippers. I already knew what was in my stocking but I pretended to be excited over every little item, as if I hadn’t just seen them all an hour ago. And I pretended to be thrilled over finding the already-found Crystal Barbie waiting for me under the tree*. But with each gift my siblings unwrapped and exclaimed over, with each squeal of surprise and amazement, my faux excitement faded until I was left sadly opening the next gift, knowing full well what was inside. It’s not that I didn’t love every little thing I’d been given but doing the unwrapping part was terribly boring since I already knew what was in the gift. There was no point to the wrapping. It wasn’t a surprise. It was a terrible way for a kid to spend Christmas morning. That sounds shallow, yes, but remember what it was like to be 12? The world is big and full of wonder and when some of the wonder fades, say because you let curiosity kill the cat, the cat of wonder, it hurts. It’s disappointing.

I didn’t want to get in trouble for my misbehavior so I didn’t fess-up, but I think I would have liked to have been busted because it would have given me a reason to cry and crying is what I wanted to do most that day.

Guess where this ornament came from? Gabe. Apparently, he collects ornaments of Batman having his boob grabbed, which I think it weird, but hey, whatever gets you festive, right? The cross-stitched “Let It Snow” ornament was from Cecily in 2007. I know that because it says so on the back. 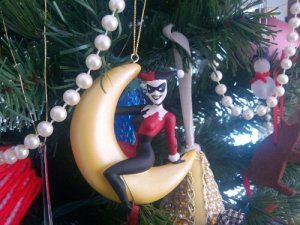 Gabe also likes his Harley Quinn posing provocatively on the moon ornament because nothing says Christmas Cheer like the image of a cartoon character gyrating like an exotic dancer.
Also…I love this ornament for all the reasons mentioned above.
Oh, and PS? That little brown pig in the background? It STILL smells delicious, Pam.

I learned a valuable lesson and it’s a lesson that shows how truly evil I am: I never ever tried to figure out presents again but I did teach all my siblings how to do it and left them alone with gifts as often as possible.

*Actually, I don’t think I got Crystal Barbie that year because I was 11 when she came out. But I did get Crystal Barbie one Christmas so that’s the gift I’m using for this story because she was really pretty. I still have that “necklace for you to wear”

Toki wears Crystal Barbie. He’s very secure in his fashion sense. Also, Evie was unavailable to model at this time. 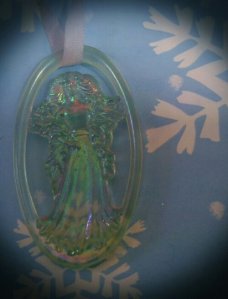 In case you didn’t believe Toki was wearing the Crystal Barbie necklace, here it is up close and shiny.

Filed under Adventures, In my backyard, My Dearly Beloveds, White trash childhood