It’s been snowy here lately which, technically, isn’t unusual because I live in the mountains and it’s winter. However, our winters have been stupidly mild the past few years. I think there were a few days when the temperature hit the 70’s this past January so it’s not surprising we’ve all been lulled into a false sense of Southern Arizonaness. Add to that that February is usually a non-snow month and one can understand how this sudden burst of arctic weather has caught us unawares. It’s the perfect time to plot a murder.

Yesterday, we were supposed to get this little snow squall. In a fickle, weather-like move, it came on early and turned out to be not as little as expected. Gabe started calling me at work, telling me to tell my boss that my mom was buried in snow and that I had to leave to dig her out. I’m not sure why anyone who knows me would buy that; they’d expect me to say that my mom is buried in snow and I need to buy a backhoe so I can pile more on top of her, but whatever. The point is, I didn’t do as Gabe requested and I stalwartly remained at work until 6:00 pm after which I closed down, locked up, bundled myself into warm outer wear and walked out into the night only to slip and slide the minute I hit the parking lot. Penguins were skating by and I think I saw a walrus lounging near a tree. It was freakin’ COLD! And the wind! It was pushing more snow onto my car than I was scraping off! I was already looking forward to a steaming bowl of hot soup and a nice warm fire on the other side of my drive home.

The road was fine as long as no one else was on it. All those other people were sliding and slipping around and that’s always a lot scarier to me than when I slide and slip. The oncoming snow plows making one-lane highways in the drifts were also alarming. And there was this hill that wouldn’t let me up it until I geared down to 2nd and took my foot off the gas. We (my car & I) crawled uphill, both ways…in the snow. But after almost an hour of putting along like a one-legged nonagenarian with a crooked cane, I made it home, ready to eat and cuddle up in my safe, warm abode.

I need to back up a second. We have a rule in our house, one that’s been very hard to put into effect because it is so complicated. The rule goes like this: If snow, then fire. It means that if it is snowing out, a fire must be built in the stove in order to keep the house warm. Granted, there are a few complex sub-rules such as: If cloudy all day for two or more consecutive days, then fire. That means that we have a lot of passive solar heating our house and after two days of no sun, it gets cold and in order to combat the dropping temperatures, one must make a fire. There’s also the If frigid arctic winds are rattling the windows for more than 90 minutes during waking hours, then fire. That means if it’s so cold outside that the cold comes inside, regardless of sun, then a fire must be roaring in the stove post haste. Those sub-rules are very hard for anyone but me to understand and I get that. I know I’m an obsessive control freak who has to have everything just so. That’s why I simplified the rule to: If snow, then fire. I thought that would cover at least one base.
As mentioned above, our winters have been mild. We haven’t needed many fires. Sometimes I build them just to use up the (poorly-stacked) wood. You know, so I can get new wood and stack it poorly, too. Regardless, I do not feel the IStF rule should be forgotten so easily.

I’ll bet you can see where I’m going with this.

I made it home, thanked my brave little trooper of a car (I love my car so much!) and walked through ten foot drifts (they really just came up above my ankles) to get to the front door, weeping because the freezingness was pulling the water out of my eyes. I got inside, took off my coat and realized IT WAS COLD INSIDE MY HOUSE!

The stress from driving bubbled forth and burst out as a loud yell, “IS THERE A FIRE GOING?” and Gabe, briefly looking up from his video game, said, “No. Why? I’m not cold.”

GABE! IF SNOW, THEN FIRE! THERE IS SNOW! WHERE IS THE DAMNED FIRE?

So I stabbed him in the face with an icicle that was conveniently hanging from the kitchen ceiling and my murderous rage is what kept me warm enough to not get hypothermia. Also, a bottle of hard liquor helped, too.

The moral of this story: I will kill you before you are able to kill me by freezing the blood in my veins, jerkface. 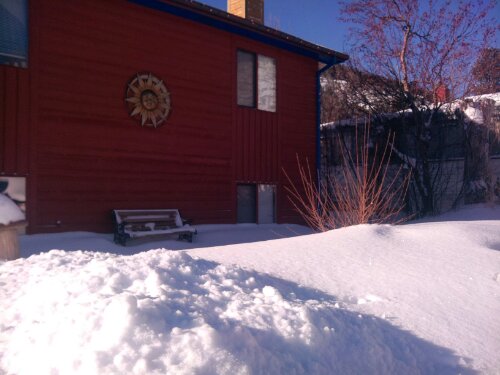 Meet our drift. I had to walk through this to get to the front door. My life is very difficult. 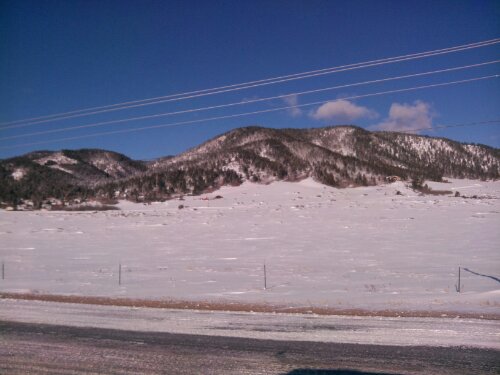 I have to admit that while this road was horrifying last night, it sure was a beautiful drive this morning.

Filed under Adventures, In my backyard, My Dearly Beloveds, My Phenomenal Fake Life

Tagged as I am a Mountain Girl, in the yard, My husband is evil and also horrid, ninja skillz, road trip