When I was tagged for a Leibster Award, I had to answer a question about the grossest thing I do. Gabe and I strained our brains but couldn’t come up with anything that was truly awful. Slightly icky, maybe, but not downright EEYYEEEW! Months later, Noelle inadvertently helped me with that. She’d come over for some occasion and she was super early so I put her to work vacuuming. Noelle was serious about the job; she had the cushions off the couch and everything. While she worked, she kept making this weird noise. Finally she flat-out asked, “Why are there so many toothpicks in your living room?”
Oh. There is my grossest thing ever.
Ok, so, it’s like this – remember how one of our goals this year was to stop eating in front of the tv and eat at the table like civilized humans, instead? Before that happened, we ate on the couch. Like heathens. And I was laaaazy. See, I have these jacked-up teeth that poke out in all directions and I get food stuck in them all the time. Well, I’d be sitting on the couch watching tv and I’d need a toothpick to get the dinner out of my fangs. I’d go get one and then have to remember to get up and throw it away and it just got to the point where it was easier not to throw it away because I was very busy watching tv. My solution was to cram the toothpick – used and full of giant pieces of tooth food – into the cushions, usually under a pillow along the edging of a seat cushion. The great thing about this was the next time I needed a toothpick, I just dug around a bit in the cushion next to me and I’d come up with 3 and didn’t have to get up to get a new one. Awesome, right? Gabe thought this practice was vile and yet he did nothing about it because we were too busy watching the tv for anyone to care that I was digging 4-time used toothpicks from the couch to stick in my mouth. NICE!
Oh, wait, it gets better. So the cats think toothpicks are mortal enemies and they’d fish them out at night and kill them, leaving their broken corpses in hiding spaces because that is what you do with dead bodies. The cats chewed on the toothpicks that had been used to excavate morsels from my mouth on numerous occasions and that’s how you know that we are a classy family.
I told Noelle all of this while she was holding out this small, beaten-up bouquet of toothpicks. She passed out and died right there. No, actually, she shrieked, “WHY? WHY??? THAT’S SO GROSS!” Little B was there, too, and was equally horrified though not as shrieky about it but perhaps also a little less forgiving.  I will never live this down. Ever. To be fair, though, I probably don’t deserve to. I mean, that is really gross.

As you may or may not know, Noelle and I recently had a Remembering Party; she came over to drink wine and discuss our white trash childhood. One topic was the gross things we have done. The toothpicks were first on the list, of course, and I was happy to tell her that the toothpick regime had ceased because we don’t eat on the couch anymore. We eat at the table and the toothpicks are right there and the trashcan is right there and I’ve become quite civilized. She was relieved and then it was her turn to share her grossest (former) habit.

When we were around 3, 4, and 8, Mom would put Noelle, Chris and me in the bathtub all together. I don’t think it was for water conservation so much as getting three of the four kids out of her hair for an hour. Anyway, you know what dirty little kids look like in the summer and how they’re covered in scabs. Well, Noelle loved those scabs. She’d sit patiently in the warm bath water, waiting for the edges of her scabs to turn that white color because they’ve detached from the skin. Then she’d slowly, patiently peel them off even if it made her bleed a bit. This only works with scabs that are a week, or so, old by the way. Anyhow, she’d remove a little dried-blood treasure and would pop it into her mouth, chewing on it like gum only with her front teeth. Gnaw, gnaw, gnaw.

This is Noelle, around 3 years old, the scab-eating age. She is holding Fluffy and a little basket because I posed her like that. In front of curtains. I obviously paid too much attention to those Nolan Mills people who took my school picture every year.

Chris and I were usually too busy being horrible to each other to really notice Noelle’s proclivity, though we knew she was doing it. We just had bigger things to worry about…like drowning each other or making each other eat soap or getting bubbles up each others  noses. You know, important stuff. 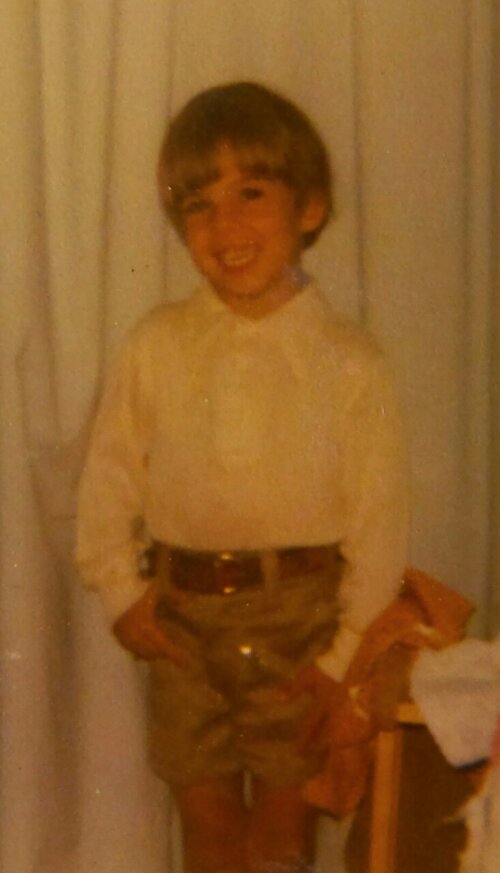 This is Chris. He’s probably 4 in this picture. He’s 13 months older than Noelle. Note how I also posed him in front of the curtains. Mom gave me a Kodak Instamatic and this is how I wasted my film.

Here’s a fun aside: Once bathtime was over, as announced by a yelling mom from the other side of the bathroom door — and really? What moron parent lets three little kids play unsupervised in the tub? (I asked Mom that very question on Easter. Apparently, she always left the door open but we got out of the tub to shut and lock it; at first she’d pick the lock but she eventually just gave up and let us gamble with our lives because she had a baby to care for or some such nonsense) Actually, you know what? I don’t think our mom understood Childhood Physics. There’s some law that states that even if there are only 3 inches of water in the bottom of the bathtub, it’s going to wind up on the floor. All of it. It seems like it would have been a lot more work to clean up all that water every few days than to watch the little ones bathe for half an hour. But who knows. I’m not a parent so I don’t have to deal with these crazy decisions. — Anyway, once the bath was done, we’d drain the tub and soap up our backsides. I don’t mean just our butts, I mean our entire backsides, from shoulder blade to kneepit. Then we’d lay ourselves down, one at a time, against the sloping back of the tub and let our feet go and we’d zip down the length of the tub all the way to the faucet. I know we banged ourselves up during this activity; I remember hitting my tailbone a few times on the way down the backrest and I know Chris and Noelle both whacked into the faucet with their heads. We must have been freakishly small kids, short and skinny, if the tub held all three of us and allowed us that much length to get up a good speed from back to front without bowling into each other. And how we survived without blood is beyond me, though a little blood on Noelle would have made her happy because it would have promised a future scab.
Oh, right. The scabs. So when she was done chewing her scab, she’d put it in the corner of the tub where the two walls meet. After a while, there’d be a pile of chewed-on scabs turning all tub-slimy. They’d be a weird gray color and once they were noticeable enough, she hid them behind the bottle of Suave strawberry shampoo (oh, geez, do you remember that stuff? It smelled like unicorn dreams. It doesn’t smell like that anymore but back then? It could have been the blood of Strawberry Shortcake (the doll, not the dessert)) and I think this goes to show that our mother was not the most diligent when it came to housekeeping. Or she was afraid of cleaning the bathroom because who wants to run into a mound of chewed-on tub-slimed scabs?
I can only assume Noelle learned her trick from the neighborhood squirrels because this stash became her winter cache. There was a definite dearth of scabbiness in the months of November through March but that was no problem for my little sister! She could just rummage through her crusty pyramid, pull out one that looked chewy yet crispy, and pop it right into her mouth; she would chew happily all winter long while Chris and I sank boats and made washcloth monsters and tried to kill each other.

It’s a shame she didn’t use those same skills in a fiscal manner because that girl would have been rich by now. Come to think of it, if I’d have been stashing dollar bills like toothpicks, we’d be able to afford the internet in our house.
Dammit, Noelle! We did it all wrong!

Post Script: Dear Noelle, Happy Birthday today! I’m sending you a box of used toothpicks and I’ve asked all the children in the neighborhood to donate their old scabs. I’ve wrapped each one like a stick of gum and put them in a pack. I think you’ll like this gift. Don’t worry, it will come with wine. Lots and lots of wine. Because I love you.

Yes, Noelle, I used a picture of a cake YOU made for Little B as your Happy Birthday image. Because I’m lazy. But I still love you. Lazily.

Filed under For my short story collection, My Dearly Beloveds, My journey to writerhood, White trash childhood

8 responses to “Toothpicks and Scabs: A Very Gross Story”