I got too hot sitting in the sun so I took my book and moved to the shade. Now I sit in a corral made of large branches from a dead cottonwood. I’m facing west. I’ve removed my shoes and socks so my toes can dig in the grass, into the earth. I hear the chickens clucking; they’ll be going to bed soon. I hear a mourning dove. It makes its Whooo-hoooo…coooo, cooooo, cooooo noise. There’s a lark somewhere far to my left. The Stupid Dove (Asian? Eurasian? The ones with the band around their throats and that sound like they were raised by crows because of the way the coo-squawk. Squkwoowk, I guess. They sound like idiots) is squkwooking behind me, looking for its mate.
The sun is descending, falling through the leaves and branches of the giant, wild willow. It looks like a cottonwood, too, but has willow leaves. The garden is growing; I can see the rhubarb from here. It’s beginning to bolt. The hops are creeping up their trellis and the robins hop around lunging at the ground for bugs. There are little black birds with beady eyes and yellow beaks, too. They are more serious than the robins who seem to enjoy the evening as much as I. Beyond the trees that line the creek, the trees whose leaves sparkle in the sun because it rained earlier today, the hill rolls tumblingly up to the rainclouds on the horizon. The clouds are lit by the sun behind them, giving them a golden glow around the edges.
Something has grabbed my attention. On the other side of the corral, the grass wiggles. I watch long enough to see that it’s a mouse, a cute mouse. It doesn’t know I’m here. I watch while I type and it nibbles at … I can’t see what it nibbles, but I see it pause, poke its head above the grass and look around. The dog comes close so the mouse stands still. That is wise as the dog loves little creatures. She wants to hug them and lick them and play with them and take them home and call them “George.” Mostly, though, she catches them and gives them heart attacks and then carries their little dead bodies around, hoping they can be friends if she’s just patient enough. The mouse still has not moved. It knows better. It must be an old mouse. Wait, now it inches its way down the streambank, slowly. I only see it because I’ve been watching. It is going to the rocks where it will be safe.
More robins congregate on the lawn, some chirp from the tree. Across the green, the Peak peeks. It looks like it has lost its snow but I know it’s still covered; I saw it this morning and there was more white than blue. This is just a trick of the afternoon light.
This is a lovely moment. The smell of grass and fresh air. I smell lilacs but that can’t be, as there are none nearby, not that I know of, at any rate. It’s warm – the high sixties at least which is funny since it started out so cold this morning, perhaps in the 40’s? Low 50’s at the most.

I want to remember this moment forever, this evening on an early summer day. I wish I could give it to everyone I meet, I think it would bring peace to many. This is the best I can do, writing about it, sharing pictures. It’s not the same but hopefully, it will help me remember later. 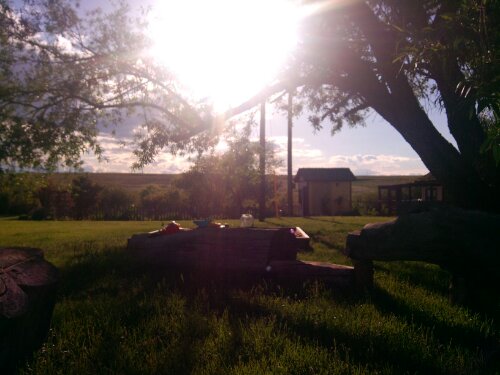 Disclosure: This is my version of Stream of Consciousness-style writing. I’ve only edited spelling mistakes. Also, I had to go into the house to post it because the internet didn’t reach all the way out there.

THE NEXT DAY, an edit:  While I was washing the breakfast dishes and looking out the kitchen window, I saw the lilacs. They’re surrounding my car. I’d been sitting by them earlier. I’ve always known they’re there and they’re still blooming so obviously, I was in some other state brought about by peacefulness yesterday when I said there were no lilacs nearby.

Filed under Adventures, In my backyard

Tagged as dogs, farms, in the yard, love this life