I’m going to use this space to whine and I’m whining about First World Problems as well as about things that didn’t actually hurt me. It’s almost like I’m clamoring for attention and, on some level, I probably am. I’m beginning to feel a tad traumatized, though, even if my problems are exceedingly minor.

I hate this month. Not the month of June, per se, but the month of June 2013. It started with moving to a warehouse for work while our workspace is renovated. We’re in cramped quarters with psychotic temperature control going on. We’re trying to maintain grace and good humor but I suck at both so I’m failing already. It’s only been two weeks and a couple of days. We’ve got another 3.5 months to go.

My lawnmower broke. We bought a refurbished one last year from Sears and got a service agreement for it that was supposed to allow us to have any problems fixed until 2014. We’d pay $49.95 for whatever problem arose and the rest would be covered. I thought that wasn’t a bad deal. Plus, the guy who sold us this thing told us we’d be able to get it maintenanced under the agreement. Well, come this summer when we finally got around to mowing our redneck yard, the mower wouldn’t start. I had Gabe call Sears and he got a run around so we marched the mower down to the store where we got it. That was a fiasco in itself but finally the guy working our case (yes, I called it a “case”) found the information he needed and reiterated that we’d have to pay $50 if it was more than just general maintenance but after that, the rest would be covered under our service agreement. Turns out, we were all misinformed because the actual technicians called to say that the mower needed a tune-up and the blades needed sharpening and it would be $116. I lost it. The mower is coming back to us, unfixed, and I am going to sever ties with Sears because I am really tired of their bullshit. I loved them once, but I have outgrown them and their crappy service and lousy merchandise so it is time to break up. I am thinking of writing them a strongly worded letter, in addition. That’s how mad I am.

And then I was attacked by something poisonous that has left bubbling blisters on the inside of my forearm. They (the blisters) itch and burn and hurt and ooze and are super gross. I thought it was stinging nettle since I’ve had a run in with that stuff before but then it got much worse than nettle ever did and both Chris and my mom feel I poison ivy’ed/sumac’ed/oak’ed myself. Yay me. No, I’m not going to spend $40 to get a shot when I can spend $10 on over-the-counter medicines and just deal with it. You know, like my ancestors did. Because I’m tough like that. And also, in pain. And whiny.

No, no, I would never hide my grossness from you. This is just one of several blisters. This one is healing and can stay out during the day but the others have to be covered so I don’t ooze on (and potentially stick to) my desk or clothing.

Then the washing machine broke, the one that washes clothing and takes all the stains and pet hair and poisonous plant oils from my shirts and capris. Of course, this happened when our friends were kicked out of their house by wildfire and came to stay with us.

I think I’ve mentioned that I live in Colorado? Yes, well, here in Colorado, our new summertime activity is BURNING DOWN FORESTLAND. It’s not like it’s something we work at doing, though maybe some of us do. Last year, the Waldo Canyon fire ate the homes of two friends and lots of others while we were at a conference in California. It was terrifying to be away from home while our town was in pre-evacuation. I was making calls to my mom and Bedot, asking them to please save the cats and the heirloom cactus (it’s over 100 years old, says family legend) and getting calls from Chris about how the fire just flowed down the entire mountainside and there was nothing anyone could do about it. I was crying at the restaurant table during Gabe’s birthday dinner. It was bad. Thankfully, our town was fine if not somewhat rattled.

This year, we’re dealing with the Black Forest fire and we’re here to experience it firsthand since it’s right down the road. Many of our friends and family were evacuated and I don’t know which ones lost their…well, most everything…yet. Gabe and I have discussed which is worse: To be home and watch it creeping around, getting closer, threatening people you love OR to be far away, worrying, letting your imagination fill in the blanks? We still haven’t come to a conclusion. Both scenarios suck. Thankfully, this one is on its way out, thanks to cooperating weather and a million bazillion fire fighting heroes.

On my way home the first evening of the fire, I could see it rising from behind some bluffs which was alarming considering how far away it was from this vantage point. 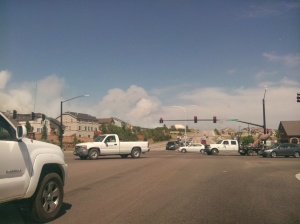 On my way to evacuate my BFF’s house (she was away on vacation) I was headed straight for the fire. I was a bit worried it would be right there when I crested the hill but thankfully, it never made it into her development. 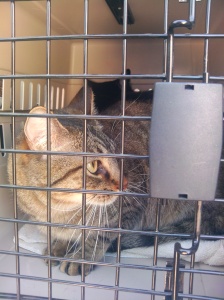 Frustrated evacuees, not happy to be leaving their home with a stranger.

The neat thing about tragedy is the human response is often overwhelmingly loving. Of course there are the jackassholes who will probably writhe in some sort of hell (if there’s an afterlife) for their assholeyness (I’m looking at you, Westboro Baptist and at you, looters) but my community as well as communities up and down the Front Range have come together again to hold each other up. It’s beautiful to watch, much like the horrible fire itself, and it makes you wonder if the beauty is enhanced by the tragedy or if the tragedy causes the beauty. Either way, I’m proud of my people, I’m happy for my friends who have been able to return to their homes, and I worry about all those who lost theirs.

Finally, I don’t want any more shit from this month. DO YOU HEAR ME, JUNE? Knock it off, already.

Filed under Adventures, In my backyard, In someone else's backyard, My Dearly Beloveds, My Opinions on STUFF

Tagged as Bedot, Black Forest Fire, cats, Chris, I am a Mountain Girl, Not a good time, pets

2 responses to “Burning churning (and cussing)”