We, the sisters, the daughters, try to go to Mom’s every Saturday to help with chores around the house. Jim’s not doing well right now (he’s sick, too. He thinks it’s leftover shingles, we think it’s a likely alien infestation in is body cavity but he thinks we don’t know what we’re talking about. Like we don’t read books and watch movies, or something. Sheesh) so he’s not quite as energetic as he had been.

Most days, we go over, do the chores, Jim makes us lunch, then we sit around and visit for awhile before finishing up and heading home.

Unrelatedish thought: You know, this is the best way to lose someone. That might sound like crap but I cannot begin to express how thankful I am that we get to spend this time with our mom as a family. She said she knows that she is loved and she hopes we know that we are, too. We do. We wouldn’t have had this had she not gone through chemo; it would have been really ugly. The ugly will still come but now we’ll be better prepared because we’ve had this time to buffer, to say the things we want to say, but, most importantly, just to be together and be a dysfunctional, loving family. It’s the end of the party for her but we all get to stand at the door and chit chat for a little while before she leaves and…man, it’s been amazing.

Back to the story: We kept telling the grandkids that it was important for us all to make good memories right now. I don’t think any of us bought into that, I think we were just trying to make this all a little less horrifying for the children. But you know what? We actually have done just that, enjoyed some shining moments.

The first happened early on. Mom hadn’t started chemo yet but she’d had her hair buzzed in order to prep for the hair-falling-out part. Noelle – and let me just take a minute to say that Noelle has hair vanity like you wouldn’t believe – wanted to do something to support Mom so she suggested we all buzz our own heads. We agreed. On the day we had planned to go baldish, our uncle Charlie, Mom’s brother, and aunt Paula came out for a visit. Uncle Charlie did the hair-butchery for us. He has three boys and a girl and he was in charge of keeping those boys buzzed up all summer long for many, many years. In other words, he was old hat at this game. Speaking of hats (and heads), Charlie and Paula brought pink ballcaps for us all to wear afterward, you know, so we wouldn’t burn our fragile skulls since they’d be mostly naked, and all. Thoughtful!

It turned out to be a fun day. Mom hated it, at first. She didn’t want her daughters to look like Marines. Now, though, she references that day and loves the pictures we took. 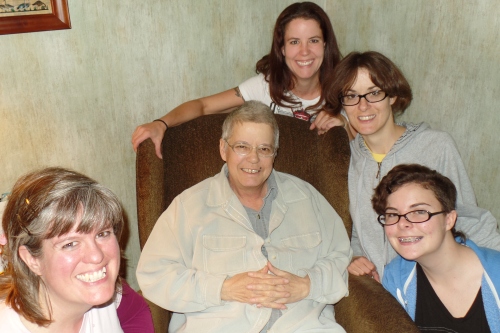 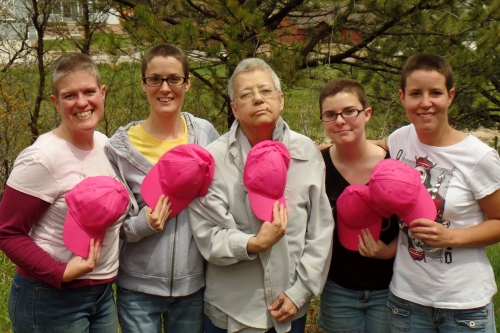 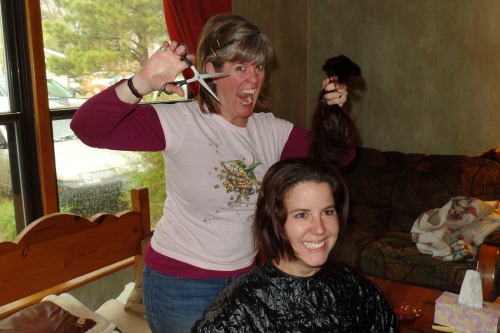 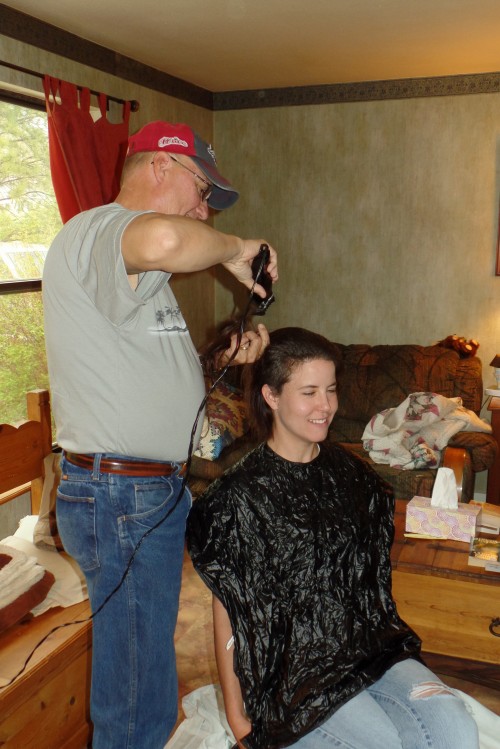 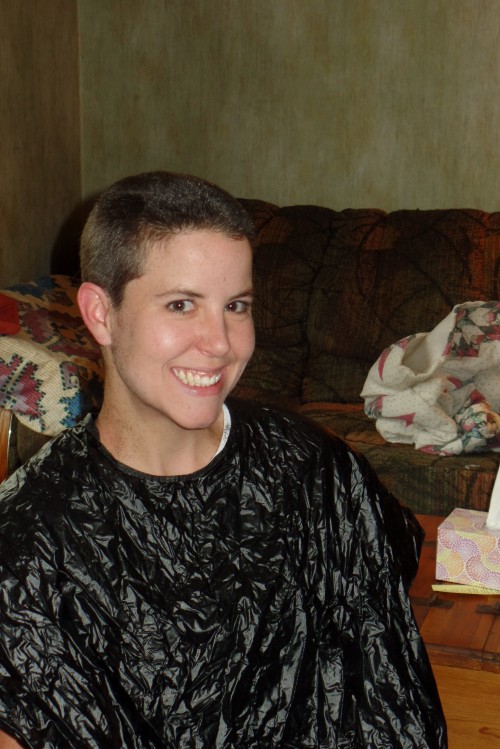 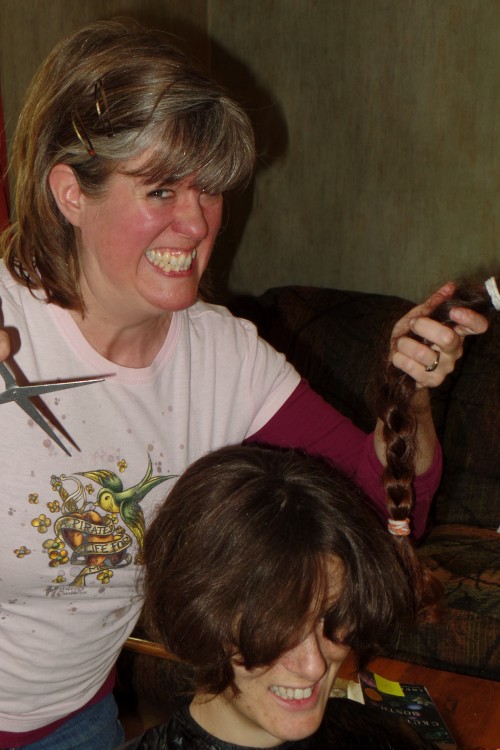 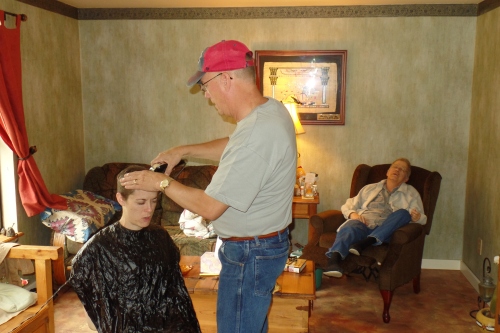 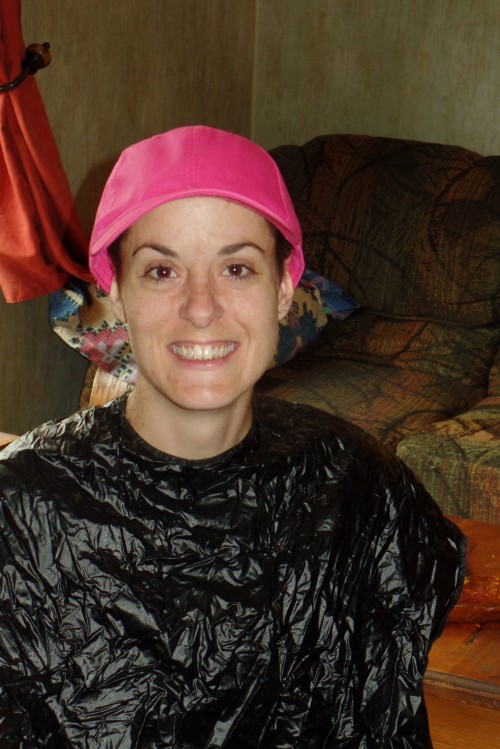 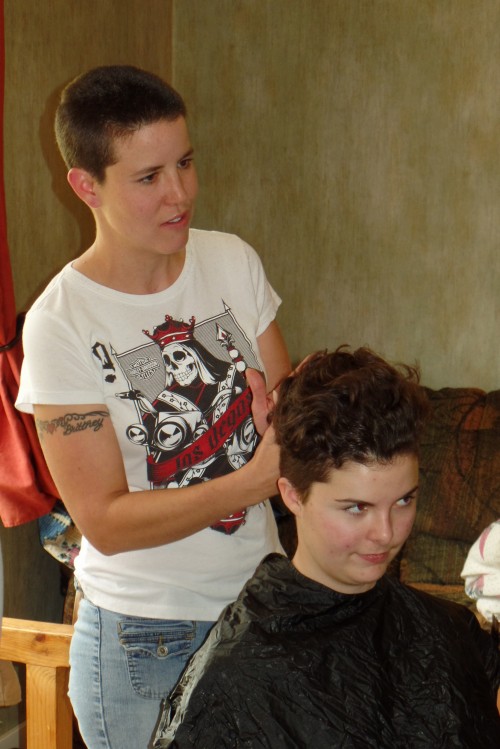 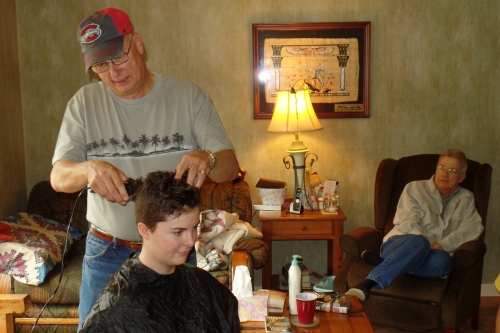 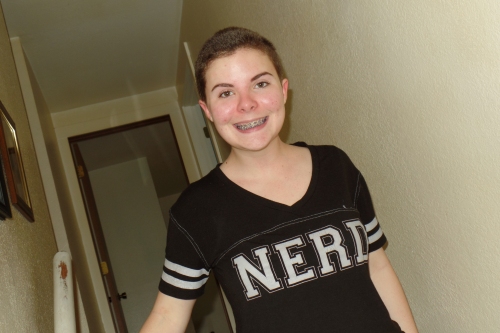 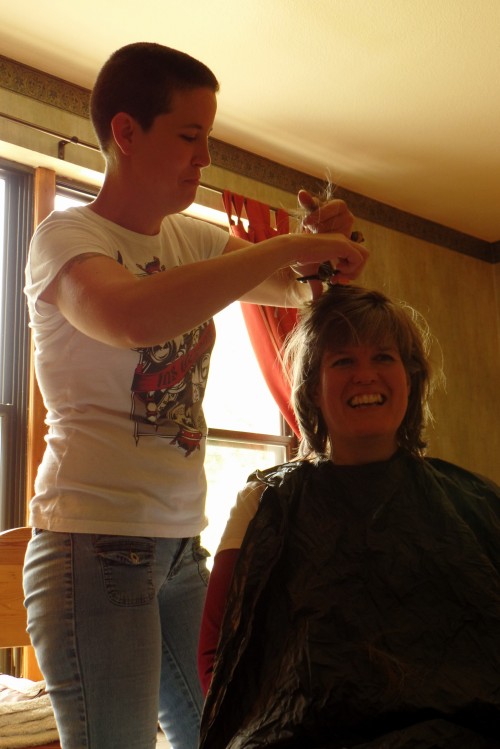 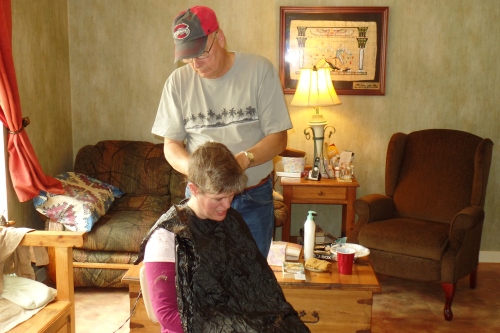 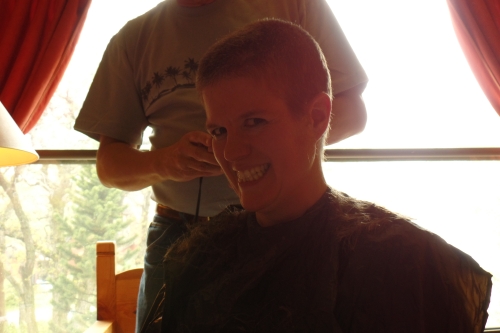 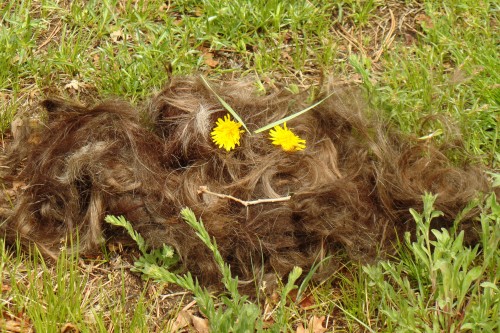 Today was another memory-making day, though totally by accident.

Our chores included tearing the tomato plants out of the greenhouse and inspecting the bodies to find any tomatoes that hadn’t been hit by the cold snap. Most of them had been frostbitten, were holey and wormy, or were too underdeveloped to ripen on the windowsill. We put all those bad tomatoes in a bucket and decided to throw them over the fence for the fun of it. But then Noelle remembered how much she loved fried green tomatoes and how do you fry green tomatoes? IN A FRYING PAN! So Britt ran off to get the fying pan that lives in the sandbox and we started a game of Whack-a-mater. It’s like if you mix cricket (the game, not the bug) and tennis…only with tomatoes and a fying pan. 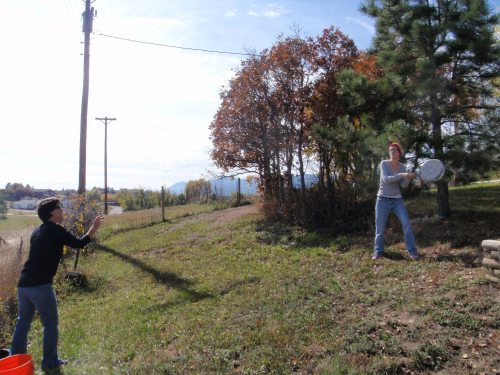 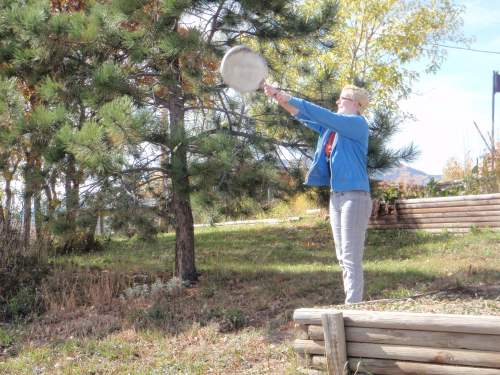 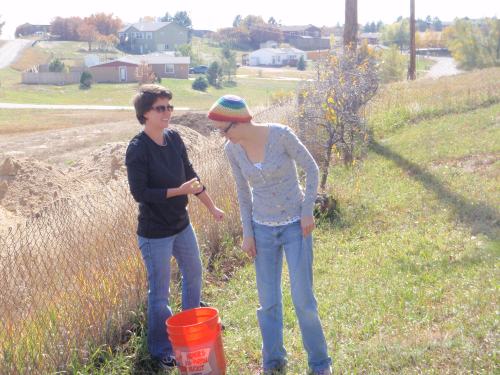 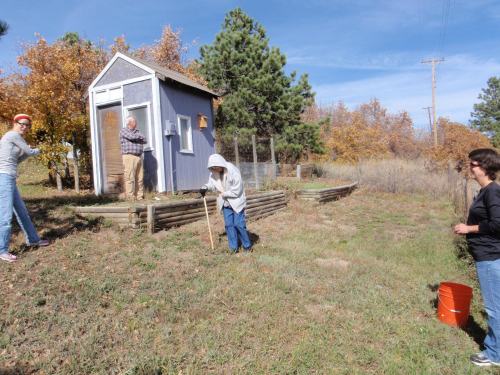 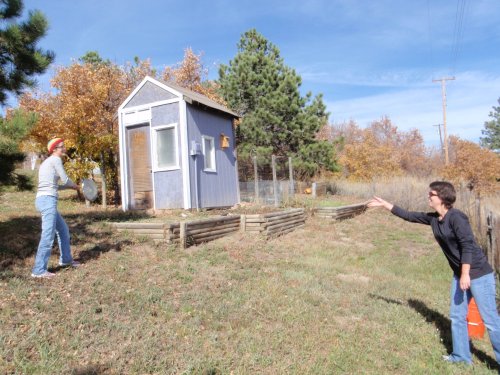 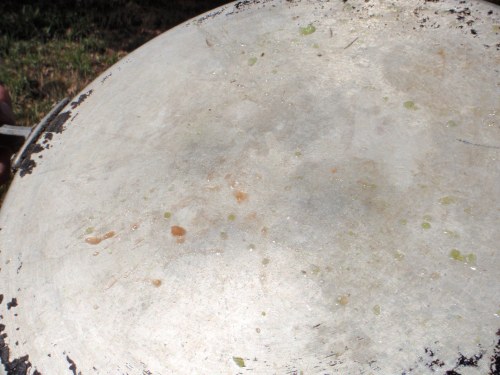 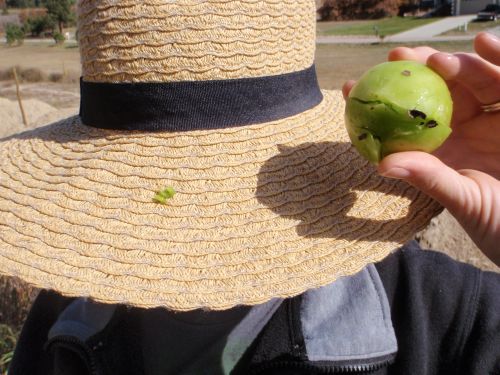 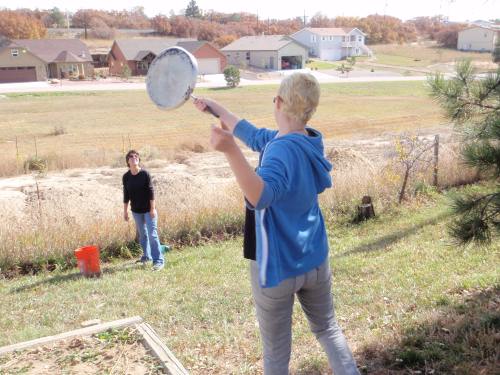 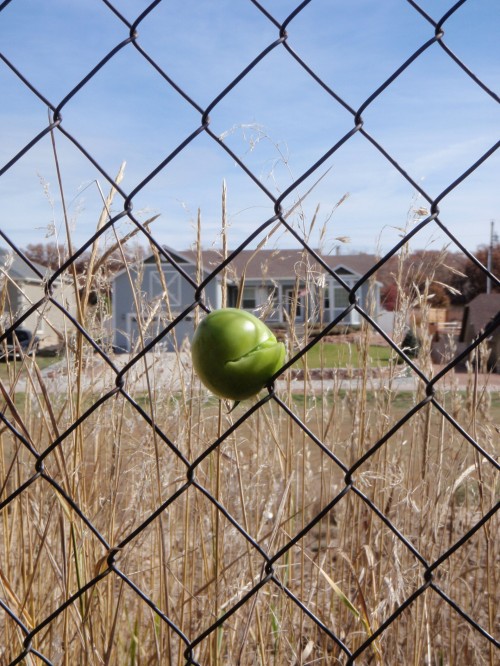 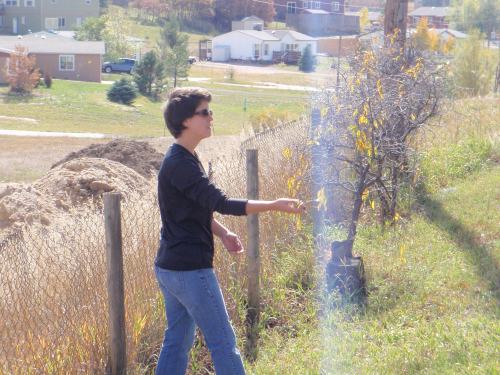 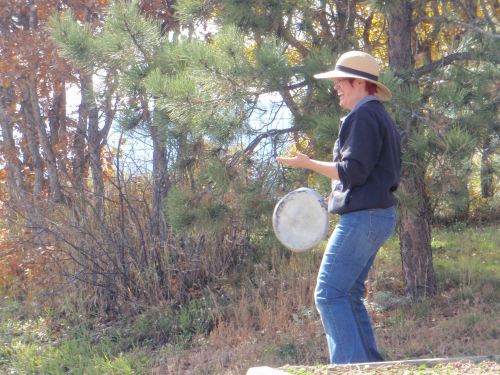 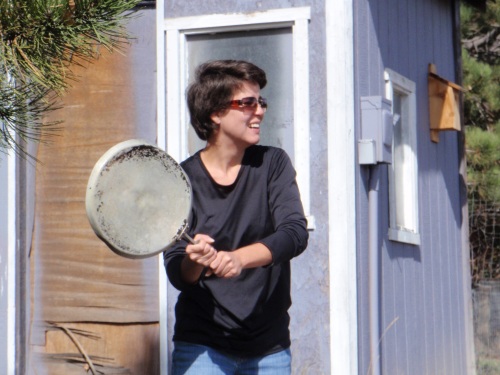 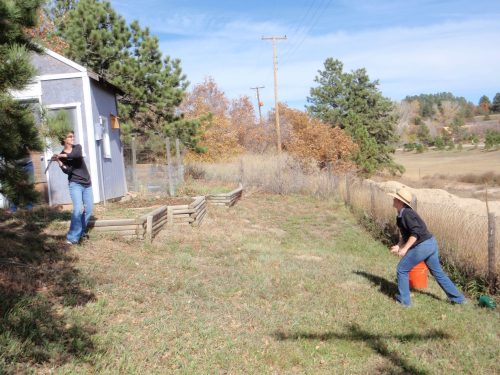 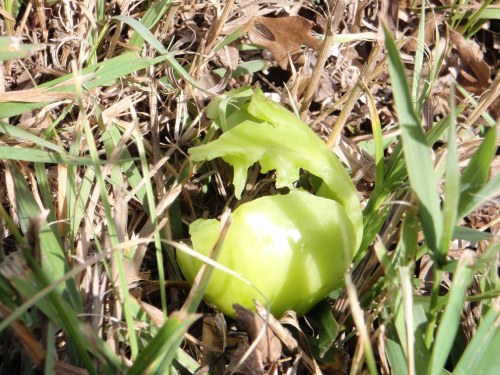 It was such a random thing but we all had the best time laughing, getting tomato splatter all over ourselves, and enjoying each other’s company in the late autumn sunshine.

Had Mom and Jim been able to do the tomato-clearance themselves, this never would have happened but because it was our job, we made a delightful memory, one we’ll talk about for years.

These are the beautiful moments that will carry us all through.

Filed under Adventures, In someone else's backyard, My Dearly Beloveds

Tagged as Bedot, Little B, My Horrible Mother, Noelle