I want to marry Peggy Carter AND be her, too.

Marvel has done something – yes, I’m going to say it – Marvelous.

Comic book stories are big again, which is both wonderful and miserable. Comic books are fun, imaginative, and let us be bigger than we are for a little while. However, they’re also trite, rife with racism, sexism, genderism, and many other social ills, and they make for some sucky movies.

Of course, there is the manga/anime craze and indie graphic novels are becoming TV shows  and films, but the biggest two providers of comic book entertainment are DC and Marvel.

From where I’m sitting, I see Marvel pulling ahead and creating an exciting, dynamic, and often family-friendly multiverse. This latter part is important because it allows grown up comic book geeks to share something they love with their children. DC? They’re making poor decisions, which is a shame because their characters are generally better known, or, at least, always have been. That’s probably about to change.

I’ve got a passing familiarity with the comic worlds and I would have considered myself a DC girl but only because I’ve had their Big 3 in my sights since I was a tot. I mean, I grew up watching Superfriends. I had a Wonder Woman doll and coveted my cousin’s Batman doll. The Flash was my imaginary friend for a long time. It wasn’t until I was a bit older that I learned about Marvel via Spider-Man and then, later, X-Men. DC has always been on my radar whereas Marvel was just out there, wandering around, sometimes in my line of sight and mostly not.

Now Marvel belongs to Disney and Disney owns ABC and they’re putting everything together to create one big story using the same actors and storylines across the board, from TV to movies to the comic books. That’s seriously cool, especially for A-Types like me who love continuity and consistency.

Disney has employed its legendary magic on Marvel, that’s for sure. They’ve got all these giant movies with big names that bring in lotsa bucks every summer. While I’m neither a Hulk nor Thor fan (yes, of course I love Loki. How can you not love Loki? That smirky face, his flippy hair, the irresistably cute evilness), I do enjoy Iron Man and Captain America and I loved the Avengers. I’ve seen most of the movies and we’ve started watching Agents of S.H.I.E.L.D., as well.

But Agent Carter is something special. The show is a bridge. Marvel has given us, the not comic geeks, a gift that will bring us into the fold (or at least, make us hate the fold less), handing over someone to love from the ground up. Peggy Carter is merely a blip in the comic world, not fully introduced until the first Captain America movie. According to Gabe, who is a comic book geek, The Cap has been known to date one Sharon Carter (the blonde “neighbor” in Winter Soldier is named Sharon, as Gabe likes to point out all the freaking time) but there has never been a real Peggy Carter…until now.

Marvel made her for us. And us = women who aren’t steeped in the Marvel universe lore.

There is so much to love about this woman. 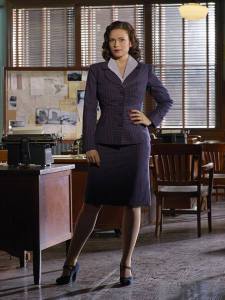 Second, and more important, she’s a normal woman. She’s not all wispy and willowy or Jillian Michaels buff. She’s not even blonde (not that blonde is abnormal) She’s a standard woman and who is really good at her job and happens to be pretty. She’s relatable. She could be someone we know, she could be our co-worker, neighbor, or friend. She could be me. (No, not really. I’m making a point, not being delusional)

In addition, she kicks ass. Seriously, she’s a scrapper when beating up or outsmarting the bad (and good!) guys and she does it in such a zingy way, I feel safer walking to my car at night. To see a normal woman beat the crap out of a man’s face with a stapler, it kind of makes me feel like, yeah, I really could fight for myself if I had to. She makes me feel stronger by showing me what a smart, confident, capable woman looks like.

But she’s not a robot, she’s not the cold, calculating agent. She has feelings. She cries when her friend is shot. She faces hard choices and agonizes over the possible outcomes. She is frustrated by the narrow-mindedness she faces at work and the sexism she sees directed toward her female friends. She has a heart, she’s compassionate, and she wants to do all the right things to make the world a good place. She’s not just Steve Roger’s widowed girlfriend, she is Captain America, herself, with good shoes and a dash of soft snark.

But the best thing about Peggy Carter? She’s mine. She didn’t belong to someone else, first. She doesn’t have an origin story that the comic book readers know and I don’t; she was merely a bit character in the background of a few issues. Gabe and I are on ground level with her, we both have to learn her together and I don’t have to hear all his Marvel knowlege regarding this character and that device and the other thing, too. Yes, there are those little Easter eggs, some of them tying into the comics and some to the movies, but they’re minor. The story, Peggy and her team, they are beginners and we’re all starting down this road together.

Marvel’s been doing a great job with women, much better than DC. I like the current iteration of Black Widow. She’s awesome. 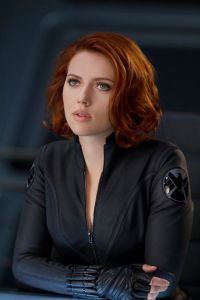 I really love Melinda May. She is phenomenal and I wish I were that tough and that I had her quintessential superhero stance.

Sidenote: My favorite S.H.I.E.L.D. baddie is also a woman. And if she’s not all villainous anymore, don’t tell me. I haven’t made it to Season 2, yet.

But my most-favorite Marvel hero? It’s Agent Margaret “Peggy” Carter. I love her so much, I might just start reading comics again. 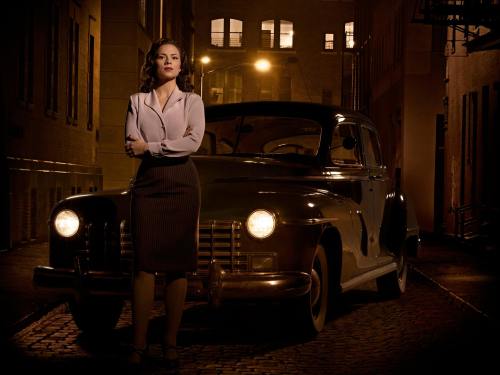 Marvel? I need merchandise. I have money for all your Agent Carter gear. Get on that, ok?

Filed under My Opinions on STUFF

Tagged as Agent Carter, Comics, I win, Marvel, Nailed it

15 responses to “I want to marry Peggy Carter AND be her, too.”