WoW – what a love story

Gabe and I started dating in the Undercity.
That is 100% true, though our dating wasn’t intentional. We were pretending to just be friends and told everyone who would listen (as well as those who wouldn’t) that we were only pals. He was spoken for and I was still recovering from a previous relationship so, obviously, nothing could possibly be going on.
Even so, we’d get on our computers every day after work, load up our little undead people, and play World of Warcraft together for hours on end. Then we added weekends, too. And since it was winter, snow days. We were spending pretty much every free moment together in a world that doesn’t really exist.
I’m pretty self-aware most of the time (well, sometimes, at least); you’d think I’d have figured out what was going on but denial can be such a good ally. It convinced me that I was just pal-ing around with my buddy all the freakin’ time and there was no reason for concern.
Gabe got me into his guild so our dates were usually chaperoned; we’d go on raids or they’d all take me down to an area that had monsters that were ten jillion times bigger than I and they’d see how long they could keep me alive. It was a fun game, but everything there was fun because I was with Gabe. Then Valentine’s Day showed up and we could get moonlight and rose petals and one night in late February, Gabe and I sat talking in petals and moonlight for hours. It was just the two of us. Near a mausoleum. Romantic. 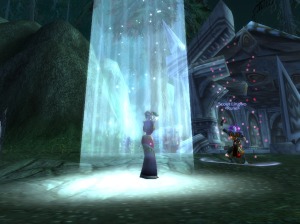 This is what our dates looked like. Romantic, right?

Then Gabe’s relationship really did come to an end and I’m sure I was the straw that wrecked that camel’s home – well, me and World of Warcraft, at least.  I started avoiding Gabe when I played WoW, either playing on a different server or rolling up characters he didn’t know or playing when I knew he wasn’t there.  Then I just stopped talking to him altogether because I engage in very healthy behaviors.
About 3 weeks later, I got an e-mail from Gabe. He said his relationship was over and he had found a place to live which was, coincidentally, right down the road from where I lived. I told him that it was nice to hear he was taking an interest in his life and when things settled down, he should give me a call.
He called me on March 31st, having just spent the day moving into his rented room. He said he’d like to meet me for dinner and catch up. We met at a Chinese restaurant in the area that we called the House of Food because it had no apparent name. We talked. We talked until the House of Food closed. We went to my place and we talked some more and it got late and we went to bed (that is not a euphemism) because we weren’t done talking. We laid in bed, and chatted some more (also not a euphemism) and around 3:00 am on April 1st, Gabe gave me the best kiss I’ve ever had in my life and we decided we should start dating in the real world.
Two and a half years later, we were married and some of the people from our guild were at the wedding, which was important because they had been so supportive of my home-wrecking ways and our scandalous meetings in the Undercity. I guess they saw what had been there the entire time and were probably pretty frustrated that it took us so long to see it, too.

I think we were sitting in the coffin shop area of the Undercity because we like to do things right.

We totally owed them free food and drink and wedding cake, at the very least.
Not too long ago, Gabe found some of the screenshots he took of our interactions from back when we were playing as friends. All I have to say is that I am apparently very powerful when it comes to denial because looking at those now? Holy hell, I am surprised I wasn’t given a red “A” to stick on my chest. The flirting and ridiculousness is so blatant! My poor guildmates.

Today is the first day of April. This post is not an April Fool’s Day joke (well, other than the trickery of putting up a post on an unscheduled day AND not being mean to Gabe)
Also, it is probably the only time I will ever say anything nice to Gabe here, but: I’m really glad you invited me to play with you in Azeroth, Gabe, and that I got to know you as someone more than just a guy I’d hung out with two Sundays a month for eight years. Happy It-All-Started-Today Anniversary.
Now if I could only find a way to really make you into a rotty little corpse…

Filed under My Dearly Beloveds, My Phenomenal Fake Life