The Amaryllis of DEATH

I recently posted a picture of my “new” (it’s four-years-old but a first-time bloomer this year) amaryllis that was all beautiful over the New Year holidays. 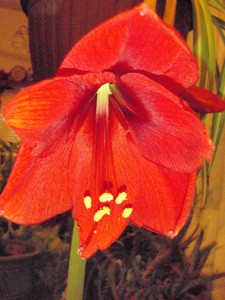 Well, I guess it got so much attention that my old (20+ years) amaryllis got jealous and decided it would bloom x 4, so take THAT, new amaryllis. 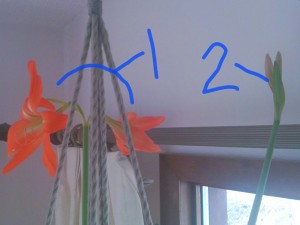 That’s flower stalk 1 and flower stalk two. I’m not pretending I’m bad at counting, here. I know there are two blooms on 1 and only 1 bloom on 2 (though there are really 2)

Ok, yes, this plant is in a different pot but they all came from the same original bulb. This is like the overflow of babies. I consider it one plant and I can because it’s mine so shut up about it already.

Actually, no, that’s not why it bloomed. It bloomed because the Christmas cactus is blooming and they always bloom together because they’re best friends. It also usually blooms in the late summer or early fall without the cactus because it’s a little selfish sometimes. It wasn’t always a regular bloomer, though.

Before it was mine, it was my mom’s. It hung in the sunniest window in the house, no matter where we lived. Originally, the plant had never been much of a bloomer and I don’t know why it changed but when those first-ever flowers came on – those big, orange, sunny, happy blossoms – we went nuts. The blossoms were huge (when compared to the nearby African violets) and vibrant and thrilled us. We paid attention when it bloomed because it always seemed like a new experience.

Remember, my mom is a witch . I think that had something to do with why this plant produced flowers when death was at hand. I don’t know if she was channeling the news into the house and it was received by the plant or if the plant was in possession of knowledge via other methods, but when that blossom stalk came up the first time, we were all eagerly gathered to watch the flower bloom.  When it was just finishing its cycle, we got the first call to let us know there’d been a death in the family. The next time it flowered, we got a call that someone else had died and we all remarked on how it was odd that the amaryllis had been blooming last time there was a death, too. And then it happened again. And again. And again. Our uncle, our great grandfather, our grandmother, our great grandmother, friends of the family…the flower came, a person went. It became terrifying. That blossom stalk no longer instilled within us a sense of wonder and excitement. Instead, we dreaded it and winced every time the phone rang when the blossom was up.

The Death Amaryllis would totally win this game every time.

When I returned from a year overseas and moved into my own place, my mom packed up the Amaryllis of DEATH and sent it with me. She didn’t want it any more. It freaked her out. I hung it in the sunniest window, watered it regularly, talked to it, and when it bloomed, I cringed. Nothing happened. The flower died but everyone else was fine. I breathed a sigh of relief and that was that.

Since then, it’s taken me years to train the thing to bloom regularly. (I actually did nothing at all) It blooms twice a year at pretty much the same time. No more random harbinger of doom blossoms.

It has bloomed in January since we moved into our house. This year, however, I have a very sick great-uncle and I haven’t heard from him in awhile. If he moves on while this flower is blooming – and, remember, there are 4 stalks up – I admit, I will freak out just a little.

Filed under My Dearly Beloveds

2 responses to “The Amaryllis of DEATH”